The Hometown of Independence, Philadelphia Continues the Tradition for Our Veterans

In 2013, the Veterans Multi-Service Center (VMC), Housing and Urban Development (HUD), Veterans Administration (VA), City of Philadelphia, as well as several other social service agencies, formed a partnership with the goal of ending Veteran homelessness. The partnership was notable—an unprecedented collaboration that included open communication, shared resources, and measurable outcomes to define success or failure. 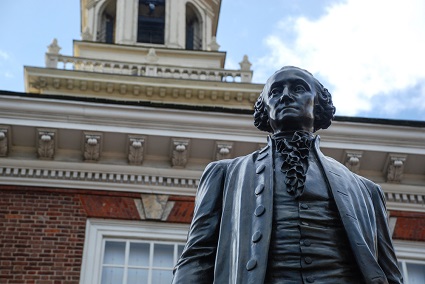 In 2015, in Philadelphia –the hometown of Independence –another declaration was made: the effective end of Veteran homelessness. With hard work and determination, the City of Philadelphia was confirmed as achieving the criteria and benchmarks for ending Veteran homelessness by ensuring that homelessness is a rare, brief, and one-time experience. To date, this partnership has helped 2,116 Veterans access homes.

Sustaining that success requires continued diligence and effort, however. Soon after our declaration, the VMC discovered that many Veterans faced challenges keeping their housing, and some Veterans were losing housing and needing to re-access housing repeatedly. We realized that without supportive services, housed Veterans remained at-risk for homelessness in the future. This revelation sparked an innovative guide for after care, aiming to make homelessness one-time by focusing on sustainability.

Through multiple trials, VMC was able to pinpoint how tackling sustainability challenges could lead to innovative programming and resultant measurable success. An example of this success is a Veteran who we will call “Larry.”

Larry is a 65-year-old African-American, honorably discharged Marine Corps Veteran. Due to significant cognitive deficits, he relies on VMC staff to assist with routine responsibilities –from paying bills to communicating with various outside service providers. Larry expresses a desire for deeper social interactions and is encouraged to attend weekly therapy groups, which mix music appreciation and open client discussion. Larry consistently shares his interpretation of the music and how it relates to his personal experience. As a result, Larry’s general wellbeing and sense of agency have improved in recent months. He may become frustrated by the stresses of daily life, which are clearly magnified by his cognitive issues, but with the support of VMC staff he is better equipped to overcome such challenges and has remained in stable housing.

A VMC-specific program, Veteran’s Trust, really helped Larry reach a greater level of stability in permanent housing. One element, money management, allowed VMC to act a as rent payee. Larry’s cognitive impairments coupled with his experience of homelessness have made money management a challenge. Veteran’s Trust also offers guidance for Veterans on spending habits and cultivates an ongoing relationship with landlords to ensure difficulties with rent payments do not arise.

A pilot project implemented by VMC under the Veteran’s Trust acts as an “after care” guide to help Veteran’s keep their housing. This is a 12-week sustainability program through which staff use an evidence-based practice, Motivational Interviewing, to improve participants’ outcomes and help the Veterans remain stably housed. It was projected that at least 60% of enrolled Veterans would achieve a higher quality of life score and that 90% of enrolled Veterans would maintain or increase their housing stability score. VMC exceeded these expected outcomes.

In to measure these outcomes, staff performed a pre-test using the World Health Organization Quality of Life tool and the Homelessness Risk Assessment, which are empirically validated tools used by agencies. Sixty-nine percent of Veterans increased their projected quality of life outcome, and 92% maintained stable housing.

We found that the sustainability pilot has been successful in promoting positive outcomes related to Veterans’ stability in housing. Larry’s story, and the stories of all the Veterans we have served, also provides insight into a commonly overlooked nuance of ending homelessness among Veterans. It is not enough to simply provide housing and expect longevity without ongoing support to ensure their transition is personalized and permanent. VMC will continue this mission of effectively ending homelessness among Veterans, while also upholding Philadelphia’s tradition of supporting Independence by making sure our Veterans succeed for the long term.

posted in:
Veterans
Back to Blog Index