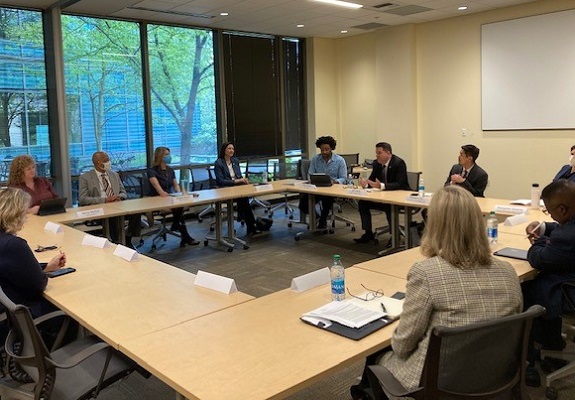 “Homelessness Is Not Just an Urban Issue”: USICH Visits Seattle to Meet With City and Suburban Mayors

This week, USICH Executive Director Jeff Olivet and Regional Coordinator Katy Miller traveled to Seattle to meet with people experiencing homelessness as well as the providers and public officials responding to the crisis.

Seattle and King County are among the places with the highest rates of homelessness and the biggest unsheltered populations in the country. In 2020, more than 11,000 people were experiencing homelessness on a single night, and more than 5,000 of them were living in tents, cars, or other places not fit for human habitation, according to the annual Point-in-Time Count.

USICH also held meetings to discuss the issue with Seattle Mayor Bruce Harrell, who took office this January; with members of the Seattle City Council; and with mayors or councilors from the surrounding suburbs of Auburn, Bellevue, Kent, King County, Kirkland, Redmond, Renton, and Snoqualmie—many of whom are leaders of the King County Regional Homelessness Authority that launched in 2021. HUD also attended the meeting with suburban leaders.

“The King County Regional Homelessness Authority acknowledges that homelessness is not just an urban issue, and it embodies one of the keys to ending homelessness: collaboration,” said Olivet. “Homelessness is the result of everything that is not working in our society, and it will only end if we tackle it together—across jurisdictions, systems, and sectors.”

While in Seattle, USICH also visited ?’al?al, a Native American-planned and operated permanent housing building in Seattle, to meet with the residents and Chief Seattle Club staff. Olivet also attended the National Health Care for the Homeless Conference and Policy Symposium, where he participated in a panel with other state and federal agencies.

USICH is in the process of developing a new Federal Strategic Plan to Prevent and End Homelessness. It will be informed by the feedback received last year from more than 650 communities and 500 people who have experienced homelessness, as well as the ongoing conversations USICH is having with public and private stakeholders involved in homelessness at all levels of government.

Photo: USICH and HUD leaders meet with mayors and councilors of Seattle suburbs.