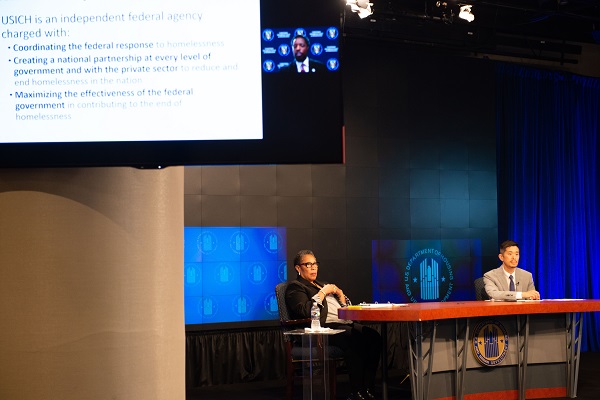 On Monday, the U.S. Interagency Council on Homelessness (USICH) held its first meeting under newly-elected leadership to discuss the Biden-Harris administration’s vision for the Federal Strategic Plan to Prevent and End Homelessness, how to maximize the impact of the American Rescue Plan, and the economic and moral obligation to prevent evictions. It was led by the new chair, Housing and Urban Development (HUD) Secretary Marcia Fudge, and vice chair, Veterans Affairs (VA) Secretary Denis McDonough.

The virtual meeting included USICH members, who represent 19 federal agencies; the Department of the Treasury; and White House leaders Gene Sperling, who serves as the White House coordinator for the American Rescue Plan; and Ambassador Susan Rice, director of the White House Domestic Policy Council.

“I am honored to serve as chair of the U.S. Interagency Council on Homelessness and to lead the federal government’s interagency efforts to address homelessness in America,” said Secretary Fudge. “Homelessness is a complex challenge, but we know that it is solvable through an evidence-based Housing First approach that incorporates necessary support services like health care and employment and education assistance. Ending homelessness will also take an all-hands-on-deck approach—and it has to start at the federal level. I look forward to ensuring that USICH sets the example for how leaders can work together to end the crisis of homelessness in America.”

“It’s a privilege to serve as the vice chair of the U.S. Interagency Council on Homelessness during this important time in our nation’s history,” said VA Secretary McDonough. “We have a once-in-a-generation opportunity to make a substantial and lasting difference in the lives of Americans who lack stable housing. Secretary Fudge and I are committed to harnessing the collective expertise and experience of each member of the council to develop and execute housing solutions that help Americans exit or avoid homelessness—a requirement to realize our potential as a nation. Homelessness is an avoidable tragedy, as the work of the council has shown over time.”

Since 2010, USICH helped drive homelessness down by 9%—nearly 50% among veterans and nearly 30% among families. During that time, more than 80 communities and three states ended veteran or chronic homelessness.

Unfortunately, much of the last decade's progress stalled in the last few years. Since 2016, the number of people experiencing homeless has been on the rise. According to HUD’s 2020 Homeless Assessment Report to Congress, more than half a million people were experiencing homelessness last year—even before the pandemic. And, for the first time since the U.S. began collecting this data, more people were living on the streets and in cars than in shelters or other temporary housing.

President Biden’s American Rescue Plan has invested billions of dollars in immediate and long-term solutions to homelessness, including:

During the USICH meeting, Sperling stressed the need to prevent evictions before the federal eviction moratorium expires July 31 as well as the opportunity that the American Rescue Plan presents to build a national infrastructure for eviction prevention. Last month, the White House announced a series of actions to keep renters and homeowners from losing their homes, including steps to speed the delivery of the more than $46 billion in emergency rental assistance available to state and local governments.

“The national infrastructure we are trying to stand up quickly to prevent evictions will also be a serious step in the prevention of some homelessness,” said Sperling. “We all have an economic and a moral obligation to do everything in our power to have policies in place to cope with the end of the eviction moratorium.”

“It is so crucial that we tackle the homelessness challenge as effectively as we possibly can. Across the federal government, we are working to implement an ambitious strategy that will get Americans experiencing homelessness the housing they need. This is a top, top priority,” said Ambassador Rice.

USICH is leading the development of a new Federal Strategic Plan to Prevent and End Homelessness, which the council began discussing on Monday. It will be guided by evidence-based strategies, such as Housing First; by the belief that housing should be a right—not a privilege; and by other priorities of the Biden-Harris administration.

“The plan is not for our agency alone but a plan for how all federal agencies will work together to support progress,” said USICH Interim Executive Director Anthony Love.